Dedrick Williams has been arrested for the murder. TMZ broke the story … cops have arrest warrants for 2 others. It’s interesting … according to the document, it appears Dedrick may not have been the actual shooter. It says he “had an active part in the murder of [2 words redacted] by blocking in the victim’s vehicle so that the two gunman (sic) could rob the victim at gun point.”

The Medical Examiner ruled the cause of death as multiple gunshot wounds.
There is surveillance video and, according to the warrant, Dedrick was wearing a white tank top and bright orange-colored sandals. Dedrick’s Instagram and Facebook accounts show a photo of him wearing orange sandals. The other gunman was wearing dark clothing and a red mask.
Cops also have surveillance video from a store prior to the murder, showing Dedrick purchasing a black, neoprene mask. 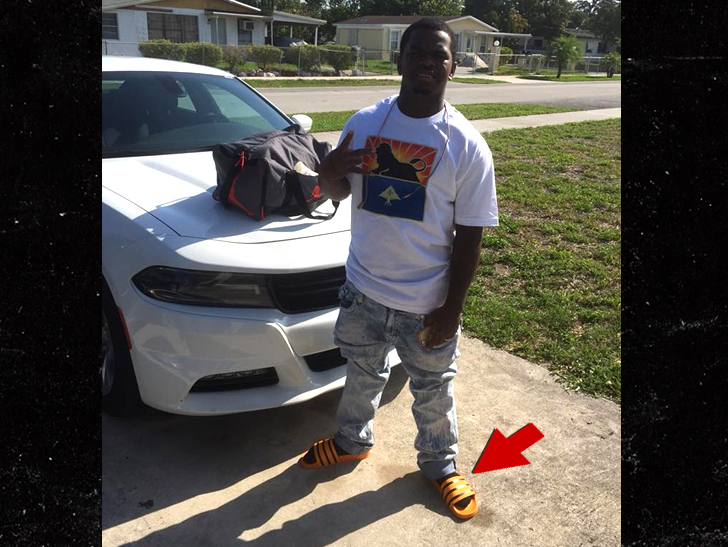 What Message Is Donald Trump Trying To Convey By Tweeting #covfefe Donald Trump has been active on Twitter since his return from his first overseas trip as president. He has really kept the ball Rollin with a tweet shortly after midnight on Wednesday morning. Well, what does the word ‘covfefe’even mean? Most of Trump’s fellow Twitter users jumped all over the apparent mistake. And #covfefe quickly became a trending topic. Swipe to see twitters reactions to the president's #covfef tweet. #donaldtrump
Tiger Woods Arrested On DUI Charges Tiger Woods was arrested on Monday morning on DUI charges in Jupiter, Florida. Woods, a Jupiter Island resident, was taken into custody at 3 a.m. on Military Trail South of Indian Creek Parkway. Woods was taken to the Palm Beach County Jail and booked at 7am. Palm Beach County Jail records indicate Woods was released from custody at 10:50 a.m Swipe to see his mugshot from his DUI arrest. #tigerwoods #DUI
Is Rihanna Pregnant? The Internet Thinks So The internet is buzzing with claims that Rihanna is pregnant. Although she has neither confirmed or denied the rumors, her fans have declared her pregnancy all over social media. Swipe to view tweets...... Lol. But really, can we declare a woman pregnant because she got a little thicker?  #rihanna #pregnancy
Eminem & Justin Timberlake Help Raise Over $2 Million For Manchester Bombing Victims Today makes it a week since the Manchester concert bombing in the U.K. While many are still grieving, others are taking a stand by doing more then just reposting pictures on social media. While Ariana Grande is reportedly hosting a benefit concert and is scheduled to pay for the funeral arrangements of the Manchester casualties, big name celebrities like Eminem and Justin Timberlake are doing their part, too. The two men — among many — have taken a stand to aide some of the distress that is placed on Manchester by tweeting out a link where people can donate money. XXL reports, together, the pair have raised over $2 million. #justintimberlake #eminem #manchesterbombing
Ricky John Best And Taliesin Myrddin Namkai Meche Were Killed On A Train In Portland While Trying To Defend A Muslim Teen From Being Stabbed Two men were stabbed to death and one injured Friday on a light-rail train in Portland, Ore., after they tried to intervene when another passenger began “ranting and raving” and shouting anti-Muslim hate speech at two young women, police said. Portland police on Saturday identified the two slain victims as 53-year-old Ricky John Best and 23-year-old Taliesin Myrddin Namkai Meche. A third victim, 21-year-old Micah David-Cole Fletcher, is being treated for non-life-threatening injuries, police said. According to witnesses, a white male passenger riding an eastbound MAX train early Friday afternoon began yelling what “would best be characterized as hate speech toward a variety of ethnicities and religions,” police said. Some of the slurs were directed at two female passengers, one of whom was wearing a hijab, according to police. “This suspect was on the train and he was yelling and ranting and raving a lot of different things, including what we characterized at hate speech or biased language,” Portland police spokesman Pete Simpson said at a news conference Friday evening. At least two men tried to calm the ranting passenger down, but “they were attacked viciously by the suspect” when they did, Simpson said. “It appears preliminarily that the victims — at least a couple of them — were trying to intervene in his behavior, deescalate him and protect some other people on the train when [the suspect] viciously attacked them,” Simpson said. Police identified the suspect early Saturday morning as 35-year-old Jeremy Joseph Christian, of north Portland. Christian is being held without bail on two counts of aggravated murder, one count of attempted murder, two counts of intimidation in the second degree and one count of possession of a restricted weapon as a felon. #portland #rickyjohnbest #myrddinnamkai #jeremyjoseph
Chaplain Sacked And Evicted By Governor Ambode Gets 5 Free Furnished Apartment Less than 48 hours after Venerable Femi Taiwo, Chaplain evicted by the Lagos State Governor, Akinwumi Ambode , from his official quarters, the cleric has been blessed with a fully furnished apartment. Taiwo, who was sacked without any query or official reason, was ordered to exit his official quarters where he lived with his wife and two children within 24 hours after he allegedly angered the governor’s wife, Bolanle Ambode. The PUNCH, on Friday, had reported that Venerable Femi Taiwo was sacked and ordered to vacate his official residence within 24 hours, a day after the wife of the governor, Bolanle Ambode, stormed out of the church during an anointing service. Mrs. Ambode was said to have been unhappy that the priest did not accord her due recognition by anointing her before the other congregants. Members of the church were said to have filed out to receive anointing oil during the service without any preference given to Bolanle, who reportedly waited endlessly with her entourage. Chapel of Christ the Light is under the control of the Lagos State Ministry of Home Affairs but the Office of the Lagos State First Lady supervises the church. Pleas from church leaders and elders had failed to save the cleric, who still had two years to spend as the presiding chaplain. New reports in say Taiwo has now settled into a new and furnished accommodation provided by members of his congregation. Taiwo told Punch that he got five offers of apartment from different members of the African church congregation. A source disclosed that church members who were angered and touched by the way the priest was treated decided to help the cleric and his family. “Apart from the apartment he moved to, he got four offers of apartment from different members of the African church congregation,” the source said. #bolanleambode #femitaiwo